More than 200 Year 7 pupils at Sawston Village College were able to complete their Bronze Arts Award – a national qualification that recognises students’ participation and skills development in the arts – with a little help from Cambridgeshire Music.

The school participated in Cambridgeshire Live last March, an initiative which gives young people a taste of world-class music up close, with top orchestras and bands coming in to schools to give concerts, run workshops, and play alongside young musicians.

Following a visit from the Brass Funkeys, an eight-piece New Orleans-influenced brass band who took part in Cambridgeshire Live, Year 7 students wrote a review of the performance, which is one of the main activities that they have to undertake in order to receive their Bronze Arts Award. Along with the contributions of some Year 8 pupils who also took part, this meant that a total of 248 pupils were able to achieve the Award in one go.

The visit was clearly a hit with many of its young reviewers. “It was a lively performance which involved the whole audience, who regularly sang along… our school band was involved and performed exceptionally well, considering they had had only one previous rehearsal,” wrote one. Another added: “I have learned that anyone can play any instrument and it has made me feel a lot better about music.”

Writing to Cambridgeshire Music, Lesley Morgan, Arts Development Manager at Sawston Village College, added: “We are immensely grateful to you for the support you gave us in achieving this. We plan to do the Bronze Arts Award with the whole group again in the new academic year.” 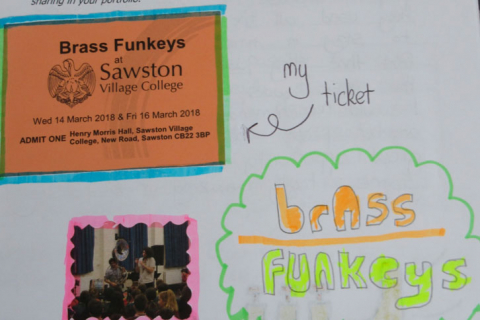