Stephanie Peachey, Senior Manager for Cambridgeshire and Peterborough at Festival Bridge – the organisation that supports Arts Award regionally – praised Cambridgeshire Music’s commitment: “I have been hugely impressed by the way Cambridgeshire Music has worked so hard to use Arts Award to help build confident artists and musicians of all different standards. They have brought music making and song writing to so many young people who might not otherwise take part in the arts – helping to develop skills in them that are fit for the 21st century workplace. Cambridgeshire Music’s work is trailblazing and they are a great inspiration to other arts groups across the East of England.”

Managed by Trinity College London in association with Arts Council England, Arts Award is delivered by more than 3,241 organisations nationwide. It is awarded to individuals across five different levels: Discover, Explore, Bronze, Silver and Gold. This week, Festival Bridge announced that Cambridgeshire Music’s delivery of 245 Awards puts it in the top five performers at Discover level among 459 organisations delivering the Award at in Cambridgeshire, Norfolk, Peterborough and Suffolk.

“Arts Award gives young people the opportunity to have highly valuable creative activities recognised formally, even if these activities are extra-curricular,” says Matthew Gunn, Head of Cambridgeshire Music. “The Award recognises the contribution of the arts and creative subjects to a young person’s broader personal growth, at a time when the arts are increasingly being squeezed out of the school day. They also give the chance for children who are less academic to shine.”

Now in its 11th year, Arts Award covers all art forms from music to fashion, and digital art to pottery and poetry. But it is not only focused on traditional skills in the way music, art or drama exams tend to. Young people also gain recognition for learning about sound engineering, marketing, web design or leadership and stage management skills for putting on an event. The entry level Awards start by encouraging young people to appreciate and experience different art forms, which in turn helps to build a more culturally-literate population, according to Gunn.

He emphasised the careers that can be sparked by the Awards: “Arts Award is encouraging a new generation of children and young people to consider a career in the creative industries, which is the fastest growing sector of the UK economy – employing nearly 3 million people, or one in 11 jobs.”

Skills from the arts

“They recognise the skills of critical thinking and creativity that aren’t necessarily included in SATs or GCSEs or other school tests. Children of all different abilities can come away with a formal qualification before they even leave primary school, which gives them huge confidence,” he adds. “And young people who go on to achieve the Gold Award can gain UCAS points too, which helps their path to university.”

“If you create a sculpture, compose or perform a piece of music, or act on stage it has to come from within you,” says Gunn. “Through the arts and music, young people have to pull on their inner resources to make independent decisions, share with others and be self-critical – all things employers love.”

• Last year, 24 Year 6 pupils at Cheveley Church of England Primary School, Newmarket, achieved a Discover Arts Award through Cambridgeshire Music’s major ‘Sing for Your School’ programme, which encouraged over 45 schools to write and perform their own songs.

“The children had a great experience researching the school history to create song lyrics and they enjoyed the recording experience too,” says teacher Anna Shepherd. “It gave them the opportunity to try different styles of music – and they were really proud of their achievements, specially when they got to collect their certificates in front of the whole school. It gave children who struggle academically the chance to shine. And it opened children’s eyes up to new opportunities – it has sparked several children to have guitar lessons in our school and to become singer songwriters and perform in assemblies. We like to think it made an impact because the children used transferable skills like literacy and numeracy to research the school’s history, write the song lyrics and fit it in time to the music – in fact, our end of year SATs results for this cohort were a lot better than the previous year. The ethos of our school is that there’s more to life than exam results – it’s about the whole child.”

• Cambridgeshire Music also helped 110 Year 3 pupils across four classes at Ely St Mary’s Church of England Junior School prepare for a Discover Arts Award by learning to play a stringed instrument of their choice (see picture) and then performing at Ely Cathedral. Every child in the year took part in the challenge, some playing mini double basses and others taking up the violin, viola or cello.

“I don’t think many of the children had picked up a musical instrument before so it was a totally new experience to all of them,” says Helen Allen, Cambridgeshire Music Development Manager. “There were children of lots of different abilities in that year and it was lovely to see them all develop and actually start to join in as the year went on. There were children at the beginning of the year who just wouldn’t join in or couldn’t sit still for five minutes. By the end, they performed in Ely Cathedral. I think they learned to appreciate music and they learned to put themselves into it – it was a big journey for some of them. It was nice through Arts Award that all of them felt they’d achieved something at the end of the year. Some of those children have probably never been awarded a certificate like this before so it’s a massive achievement for them. It’s something that’s accessible to all children. And some of them have been inspired enough to want to carry on having music lessons – they perform regularly in school concerts, which is really nice. I don’t think they’d have thought of having music lessons otherwise.”

PUBLISHED OCTOBER 2017
Children across Cambridgeshire are top of the class when it comes to artistic achievements, thanks to the ‘trailblazing’ work of Cambridgeshire Music.

This week, it was announced that Cambridgeshire Music is one of the top five performers in primary schools across Norfolk, Suffolk, Peterborough and Cambridgeshire when it comes to delivering Arts Award at Discover level. Over the last academic year, Cambridgeshire Music has delivered 245 Arts Awards – a unique award open to children and young people giving them the opportunity to discover the arts around them, find out about artists and their work and share their experiences with others. 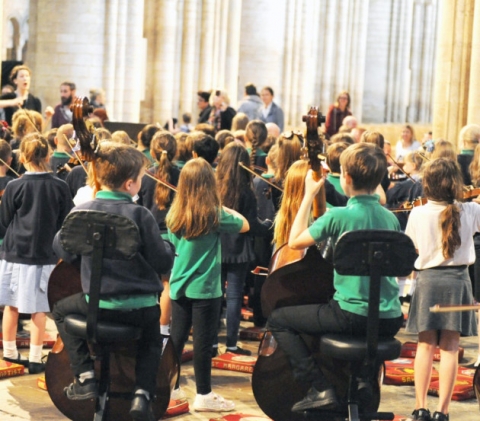 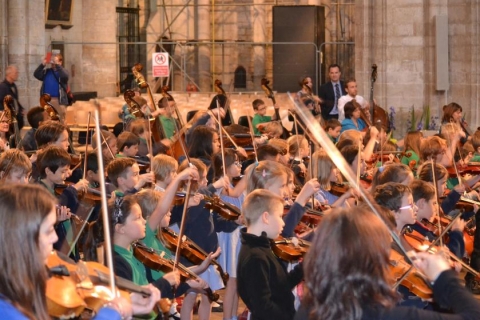 “There were children at the beginning of the year who couldn’t sit still for five minutes. By the end, they performed in Ely Cathedral. It was a massive achievement.”
Helen Allen: Cambridgeshire Music Development Manager

“THERE WERE CHILDREN AT THE BEGINNING OF THE YEAR WHO COULDN’T SIT STILL FOR FIVE MINUTES. BY THE END, THEY PERFORMED IN ELY CATHEDRAL. IT WAS A MASSIVE ACHIEVEMENT.”
HELEN ALLEN: CAMBRIDGESHIRE MUSIC DEVELOPMENT MANAGER