A disaffected and isolated teenager at risk of exclusion from school who gained huge new self-confidence and found kindness; a man with dementia who overcame his loss of language to communicate in new ways and play his clarinet again – these are just some examples of the power of music therapy, and how it can change the lives of young and old alike.

Now a new clinic run by Cambridgeshire Music in Huntingdon is making sure this vital service is available not just in Cambridge but across the whole of the county. Cambridgeshire Music operates one of the largest teams of music therapists in the country. Since its establishment in 1995 the team has gone from strength to strength with music therapists working with individuals, as well as in special schools, mainstream schools, units attached to schools, clinics and children's centres across Cambridgeshire.

“We noticed that there was a real gap in provision in areas such as Soham, Ely and Huntingdon,” explains Orla Casey, Head of Music Therapy at Cambridgeshire Music. “Our clinic will give even more children and families access to this special therapy, which can open up channels of communication when verbal skills are limited, and really improve emotional and psychological wellbeing. And you don’t have to know how to play an instrument to do it.”

Cambridgeshire Music is part of Cambridgeshire County Council which, as well as music therapy, provides schools and individuals in the county with music tuition, organises county orchestras and ensembles and supports schools in developing music in their curriculum. It recently launched Sing For Your School, a project which gets every school composing and performing their own songs.

Music therapy uses music as a way to connect in a non-verbal way. Just as a parent instinctively responds to sounds made by their child, developing a shared language over time, a music therapist will start with whatever the client wants to express. So if an angry child wants to bang loudly on a drum for an hour, the therapist will ‘meet them in the music’ – allowing that expression and improvising with them, helping them to develop a more interactive way of playing that encourages listening and following instead of just leading.

Richard was a difficult 15 year old. Adopted at a young age, he had lost contact with his only brother, and had difficulties with his adoptive parents. He loved playing the guitar, so when he had the chance to take part in music therapy sessions at his school he was interested. Over the course of a year, Richard changed from a disruptive, competitive member of the group, to a sensitive and supportive friend helping the other students to feel included. He worked hard learning pop songs he loved, discovering different ways to express the songs’ moods. His self-confidence soared and he became an open-minded and thoughtful young man, able to make informed decisions about his future.

Leading the way in international research into music therapy and autism, Cambridgeshire Music received a £88,000 research award from the Grieg Academy of Music Therapy, Norway and the Evelyn Trust, which enabled 40 children aged 4-7 with a diagnosis of autism to receive intensive music therapy. Members of the team will be presenting initial findings at the prestigious European Music Therapy Conference which begins today in Vienna.

Cambridgeshire Music’s work with people with dementia is also having a major impact. Dementia can gradually close the door on language, leaving sufferers feeling isolated and unable to follow conversations or understand a joke. Edward’s world was shrinking as his dementia took hold, until he began music therapy. The encouragement of his therapist enabled him to rediscover his love of the clarinet, in a safe atmosphere where we could express his true feelings.

“We often improvised together on the clarinet, and on one occasion this led to a very soulful and melancholy interaction,” explains Mary, Edward’s musical therapist. “In his playing it seemed as though he was able to tell me about his difficulties in communicating and how frustrating or sad they made him.”

5 things to know about music therapy

Music therapy originated in Veterans hospitals after World Wars I and II when local musicians played for traumatised veterans in hospitals with very positive results
An interesting way to understand music therapy is to think of a baby and parent having a conversation through sound to support self-awareness, relationship, development and change.
People of all ages can benefit from music therapy. It works by stimulating parts of the brain responsible for physical and mental functions
It is often used when verbal skills are limited due to physical or learning disability, or where clients are unable to make use of a verbal therapy due to emotional distress
You don’t need to be musical or play an instrument to benefit 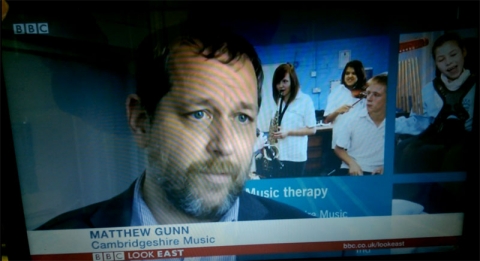