OVERTURE BRINGS INSTRUMENTAL LEARNING BACK INTO CAMBRIDGESHIRE SCHOOLS FOR JUST 1.88 A WEEK

About us
News
Overture brings instrumental learning back into Cambridgeshire schools for just 1.88 a week

School pupils in Cambridgeshire are being given the opportunity to learn a musical instrument for less than £2 a week through a programme that has been praised for helping to ‘transform’ local music education. 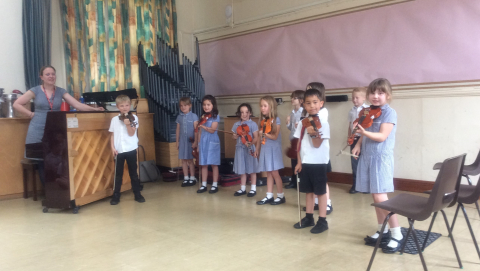 The Overture project, which was created by Cambridgeshire Music, ran at 12 schools in Cambridgeshire last academic year, and according to teachers is giving hundreds of pupils a hands-on experience of music that, for many, would simply not be possible without it.

Schools can set up weekly, half-hour sessions for small groups of around 10 children aged seven to 11, who then learn using a particular family of instruments – such as strings, woodwind, or brass.

Support from an expert tutor, the instruments themselves, and any other learning materials are all provided. Over the course of the project, the pupils also form their own ensemble, and put on live performances for parents, teachers and their friends.

The project is currently subsidised by the Department for Education and Arts Council England for the first two terms, during which time schools pay just £6 an hour. After that, they can opt to continue at a rate of £18.75 per session. For a group of 10 children, that means that the school or parents need to pay around just £1.88 per pupil, per week, to enable them to learn an instrument.

As a result, more than 200 pupils across Cambridgeshire have been able to learn a musical instrument – many of them for the first time – through the Overture programme during the 2018/19 academic year.

One example is Townley Primary School in the Fenland village of Christchurch, where 24 of the school’s 93 pupils have been learning string instruments. Head teacher Maria Higgins said that this had completely changed the way in which they were able to deliver music at the school.

“This is an area where quite a lot of families cannot afford to pay for music lessons,” she said. “Many of our pupils are on free school meals and it would be difficult for them to get involved in music outside school.”

“None of our teachers are very musical and we don’t have any instruments, so without Overture we would have had to download web resources to meet the requirements of the curriculum. Overture has transformed the experience we can offer. The children have been able to learn an instrument, learn to read music, and play together as an orchestra.”

Although music is a requisite part of the national curriculum for Key Stages 1-3, recent surveys have suggested that some schools are struggling to meet the requirements in full.

In a review published earlier this year entitled ‘The State Of Play’, the Musicians’ Union suggested that music education is increasingly subject to a ‘postcode lottery of opportunity’, in which children from families with an income under £28,000 are half as likely to learn an instrument as those from families with an income of more than £48,000. A separate report by the All-Parliamentary Group for Music Education has found that more than 50% of primary schools cannot meet their music curriculum obligations up to Year 6.

By keeping the cost of learning an instrument low, Overture has enabled many schools to find innovative solutions to funding a high-quality programme of music teaching. Pupils at one primary school have formed their own business – a school tuck shop selling healthy snacks – with support and guidance from local enterprises, to raise the £18.75 per week needed to keep the programme running. Another has been able to find extra funding through a partnership with a nearby independent school.

Ms Higgins believes that the programme has also contributed to pupils’ wider educational attainment and an improvement in SAT results. “The children who have been learning instruments have noticeably improved both in English and Maths, as well as in confidence generally,” she said. “I think the reason is because, by learning an instrument as part of a group, they have really developed their wider ability to concentrate and focus.”

Matthew Gunn, Head of Cambridgeshire Music, said: “We have found that this is a system that really works for schools. There are several cases like Townley where a school has not had any instrumental teaching at all, and now has an entire class or year group playing instruments.”

“It is just one of several initiatives that we are developing to bring instrumental education to young people in Cambridgeshire. We already know that learning an instrument can play a hugely beneficial role in a young person’s development, and through projects such as these, we hope that every school will be given an affordable way to make that happen.”

Further information about the Overture project is available at: https://www.cambridgeshiremusic.org.uk/pages/discover-music/tuition/overture.html